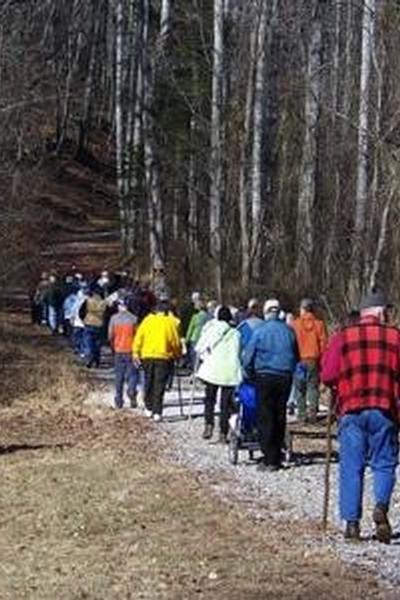 The public is invited to a guided two-mile hike at Reynolds Homestead in Critz, with the Dan River Basin Association (DRBA) on Saturday, Aug. 7. An outreach campus of Virginia Tech, Reynolds Homestead features the birthplace and boyhood home of tobacco magnate R.J. Reynolds and a Forest Resources Research Center in the midst of 780 acres of fields and woodlands. An optional tour of the historic Reynolds house and grounds will be offered.

Participants will meet at 9 a.m. at the entrance to the Continuing Education Center at Reynolds Homestead (GPS 36.6432, -80.1488) to begin the day’s activities.

For DRBA’s August First Saturday Outing, the return to the Homestead is a biennial tradition, begun in 2007. Over the ensuing dozen years, hikers have observed the results of experiments, such as erosion control at stream crossings and the effect of environmental conditions on loblolly pine plantations.

Originally named Rock Spring Plantation, this 18th-century tobacco estate is near the face of the Blue Ridge Mountains. Views from the trail include the nearest peak, the oddly named No Business Mountain, so called, according to tradition, because visitors had “no business” looking for the family’s still.

Additional attractions on the property include the well-preserved African-American Cemetery, a gateway entrance honoring the tobacco and aluminum foil legacy of the Reynolds family, and a log tobacco barn near the trail that interprets the history of tobacco growing and curing that formed the foundation of the Reynolds family fortune.

Afternoon tours of the national landmark historic site will be offered at a cost of $4 per adult and $2 per student, payable to the tour guide. Built in 1843, the two-story brick home was restored in 1970 to its 19th-century state and includes many of the original family furnishings.

The son of Hardin and Nancy Reynolds, R. J. Reynolds was born here in 1853. The tobacco factory he established in Winston, North Carolina, grew to a multi-million-dollar company making him the wealthiest man in North Carolina when he died in 1918.

Outbuildings near the house include a log icehouse, a log granary, a brick milk house and a brick kitchen. In the kitchen hangs a picture of Kitty Reynolds, an enslaved woman who tradition says saved Hardin Reynolds’s life by distracting a raging bull.

In 1880 a landmark U. S. Supreme Court decision resulting from the flawed murder trials of two of her sons guaranteed protection of legal rights of formerly enslaved persons.

Participants in the outing should bring water and lunch, wear hiking boots and dress for the weather. All participants will be asked to sign a waiver.

Reynolds Homestead is located at 463 Homestead Lane, Critz. From Martinsville, travel west on U.S. 58 for about 20 miles. Turn right onto Abram Penn Highway (Rt. 626), indicated by the second of two brown signs. Drive about three miles and bear left onto Homestead Lane. Parking is at the end of the short road.

From Stuart, travel east on U.S. 58 for about nine miles. Turn left onto Abram Penn Highway (Rt. 626), indicated by a brown sign. Drive about three miles and bear left onto Homestead Lane. Parking is at the end of the short road.

Outings and meetings of the Dan River Basin Association are open to the public without charge.